Yes, true story. I threw up on the side of a Buddhist temple, and Buddha, I am SO sorry.

Did I ever tell y’all just how much I LOVE New Year’s Eve? Fireworks, drinking, and the promise of a new things to come makes me so excited. So on December 31, I woke up super excited because we were getting out of the gross hotel we were staying at in Phitsanulok, Thailand and ALSO because we were riding bikes around Sukhothai Historical Park. I was super excited to ride a bike because I haven’t done it in forever!

Some of us opted to rent bikes to get around Sukhothai Historical Park while some opted to ride the trolley. We hopped on and hopped off bikes to walk to sites while our tour director explained the history behind the sites we were seeing.

Then we got free time just to roam the park via bikes and off we went. 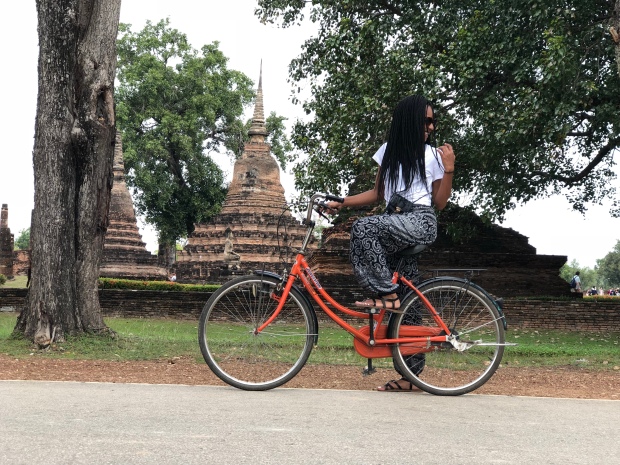 After riding bikes and taking some cute photos, we boarded the bus again and headed for Chiang Mai!

We got to our hotel in Chiang Mai early in the afternoon. Immediately, I threw on my bathing suit and headed down to the pool. Free time was kinda rare on this trip, so any chance I got to sit by the the pool with wifi and a book, I was happy. A few of my travel mates had the same idea, because a lot of them were already down there. We got drinks and conversations flowing at the pool. We were down there for a while before we started to trickle out to start getting ready for our special New Year’s Eve Dinner at the hotel. Dinner was okay…but it was fun since we were all eating together. I got wine to get the party started, then after dinner, some of us headed to the  bar (surprise) to get more drinks before we went to into the city for the Lantern Festival.

There has been very few times where I have been so incredibly happy that I felt like my heart was about to explode….but that night was it.

I won’t bore you with too many words…watch the video below!

After that, and more drinks and bringing in the new year, things got weird…and fast. We went to this “club” thing called Zoe. It was loud, it was packed, it had strobe lights. It was a no for me.

So I took a Tuk Tuk back to the hotel to call it a night around 1 a.m.

The next morning was doozy of course for a lot of people. But I couldn’t let that stop me…today was the day we were going to talk to a monk, and I was weirdly excited about that. I threw on a dress, went down to breakfast, couldn’t stomach anything but fruit and yogurt and met the group at the bus.

Today’s agenda read as follows: “board a ‘mini bus’ en route to Doi Suthep Temple, high in the mountains of Chiang Mai. See jungle views as you drive along narrow, twisting roads”

Sounds like a recipe for a hungover disaster right? We boarded the mini bus and our tour director kept asking, me in particular, if we got motion sickness. I do, but I assured him that if I look out a window, I’m would be fine.

I was not fine.

This was a twisty ass, narrow road, so high in the mountains, that my ears were popping. I held a scarf over my nose to keep the smell of exhaust fumes from irritating me further. But, we were smushed, about 8 people deep in the back of a pick up, and even though I felt myself getting sick…I had to keep it together.

We finally reached the temple and I had to be helped out the back of the “mini bus”. I stood off to the side because now that I was in a static position, all the drinks from 2017 were about to come up with a vengeance in 2018. Problem was…I was surrounded by people at one of Chiang Mai’s most beautiful temples. But before I knew it, I had adeptly threw up on the side of the temple…not once, NOT twice, but three times.

Right away, I had a small group of Thai people surrounding me, whisking me away while I apologized a thousand times because I’m pretty sure throwing up at a holy place is frowned upon. I was taken to a fancy jewelry store that had a gorgeous, shaded garden. The employees there gave me ginger tea and something to snack on while my group toured the temple. They came by to check on me and were so incredibly nice to this American girl with the weak stomach.

Also, I’ve mentioned a few times that if you’re going to Thailand, that it’s important to pack some fiber for obvious reasons. That day, I learned that ginger tea did the trick just as well *wink*

Now I was REALLY feeling better. My group came down and met me at the jewelry shop where I did had to sneak away a few times for a few phantom burps that I thought would turn to me upchucking (sry), but it didn’t. It’s just the thought of us going back down that mountain in the back of a pick up truck had me gagging all over again. Then my tour director came up with the genius idea of me riding in the front. That way I could see the road and my brain wouldn’t get all confused as to where it was. That helped A LOT and I got down the mountain without incident.

We stopped to a Thai mall for lunch and I just wished we had more time there…it was gorgeous and so big; I wanted to explore and shop.

TIP: When eating out in Thailand, when you’re ready for your check, actively seek out your server and let them know…otherwise, you’ll be sitting there forever as the Thais aren’t as intrusive in the dining experience as American waitresses are.

After lunch we boarded our motor coach and headed to Wat Suan Dok temple to speak with a Monk and this was definitely a highlight of my trip. The monk had such a good story and explained Buddhism to us. I learned that it’s not a “religion” but a way of life; so it’s possible to be Christian/Catholic, Jewish/etc AND Buddhist. The thing I took most away was a quote from Buddha himself, “The root of suffering is attachment”. I also learned mediation techniques that I haven’t quite mastered yet (it’s hard trying to quiet my brain, but I’m working on it.)

We had a few minutes of rest before the next optional activity I signed up for, dinner at a Thai family home. If you ever find yourself in Thailand, I HIGHLY recommend www.chiangmaihomehost.com

Such a good way to learn more about Thai culture in a way we ALL can relate…FOOD. We were invited into this family’s home, tried different teas, toured their garden, and smoked a cigar made out of plantain leaves. Our friendly instructor and his family not only showed us how to make Pad Thai, but the tables turned (kinda, literally) and we got to cook our own custom Pad Thai. Then we sat down to a delicious meal under the stars. It was a night to remember. 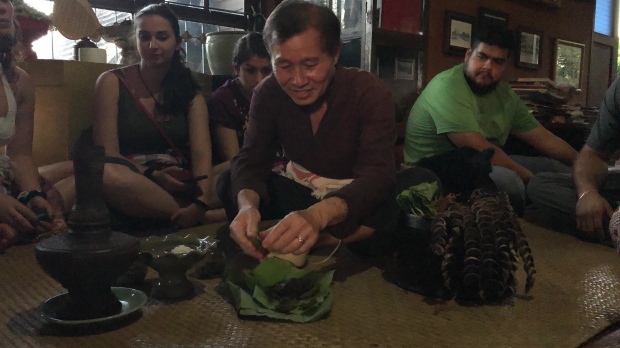 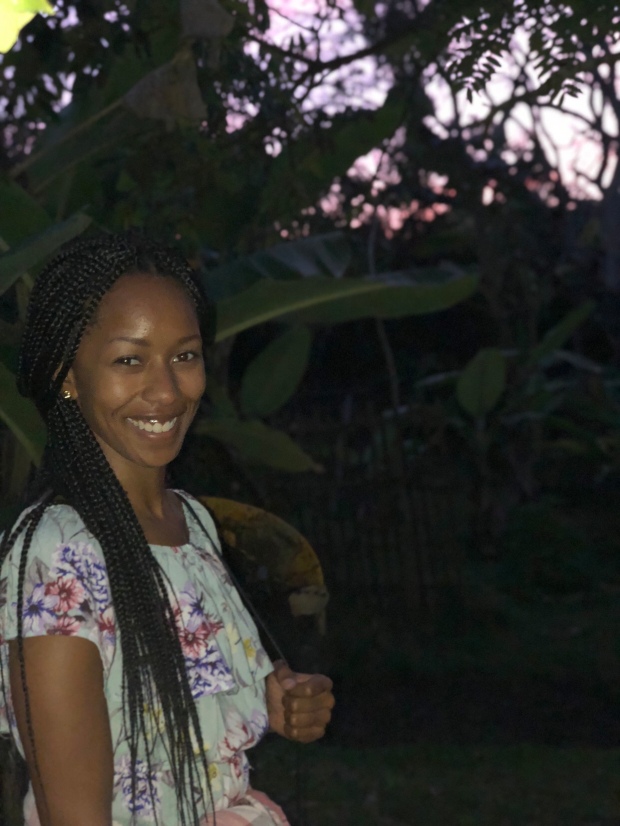 Would you believe that just earlier this day, I was spilling my guts out at at temple?

That day was such a long day! From NYE to throwing up on the side of a temple, to talking with a Monk, to learning how to make Pad Thai, I was having fun in Thailand, but  I was halfway done with my trip! But the next day was the sole reason I booked this trip…ELEPHANTS!

2 thoughts on “I Threw Up at a Temple”